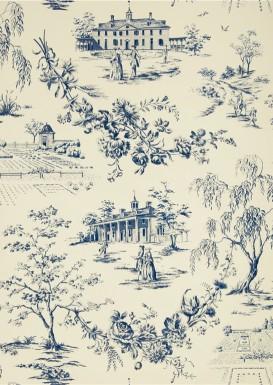 Established in 1880 by Achille Brunschwig, Brunschwig & Fils began as a tapestry-weaving mill in Aubusson, France. In the early 20th century, the firm expanded its collection to include printed and woven silks and cottons from the finest European mills. By 1925, under the direction of Achille’s son, Captain Roger Brunschwig, the company had opened showrooms in New York and other American cities.

When Roger's wife, Zelina, joined the firm as a successful interior designer and stylist, the company broadened its product base to include wallpapers and trimmings. Zelina also continued to enrich the company's extraordinary archive of antique textiles, wallpapers and trims, and collaborated with museums and restoration projects around the world to document and reproduce historic fabrics. Today, the firm offers more than 20,000 fabrics and 1,200 wallcoverings, ranging from fine documentary reproductions to striking contemporary designs.

In 1993, Brunschwig & Fils and Mount Vernon introduced The Mount Vernon Collection. The collection consists of fabrics and wallpapers based on the original furnishings and collections at Mount Vernon. Brunschwig’s products are available only through a decorator.

Fabricut, started in the 1950's, was the creation of Joe Finer and Harry Guterman, both survivors of Nazi Germany. Today, the company is run by an executive team, which includes two of the sons of Finer and Guterman.  Fabricut has grown into the largest, most progressive distributors of decorative fabric in the world, offering over 40,000 choices in unique fabrics and trimmings.  What sets Fabricut apart is its team of talented and passionate workers, attention to detail, and customer service, attesting to Fabricut's founding ideals - nothing is more powerful than pride in ownership and the freedom to dream.

The Mount Vernon Collection was designed with not only inspiration from the buildings and grounds of Mount Vernon Estate, but also the life and legend of George Washington.