The original brick greenhouse was completed in 1787. In 1791 and 1792, one-story wings were added to each end of the building. The wings were designed to accommodate the enslaved workers who lived at the Mansion House Farm, possibly housing as many as 60 individuals in 1799. The complex was completely destroyed by two separate fires, one in 1835 when the Washington family was still in residence, and the other in 1863, just three years after the Mount Vernon Ladies' Association opened the site to the public. 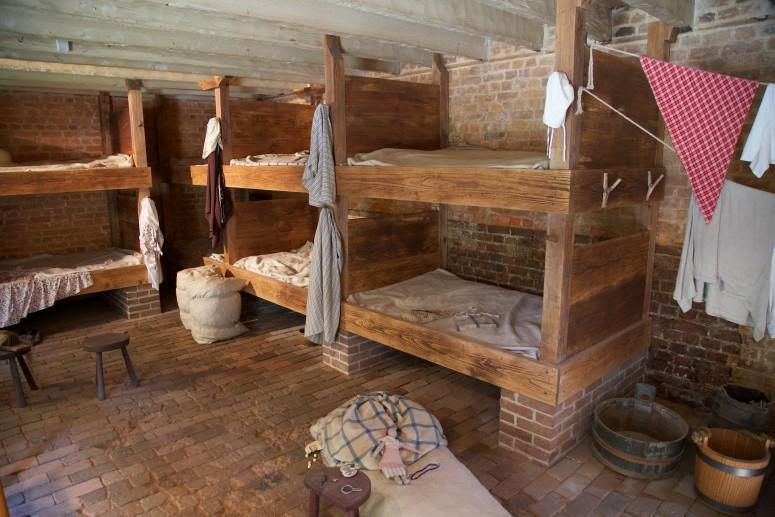 Each room in the quarters was heated by a fireplace and accessed by a single exterior doorway. Laying out the quarters in 1791 with just four large rooms was an unusual decision that runs counter to the regional pattern at that time, when slave families generally were housed in separate log cabins. The unusual communal living arrangement that the plan suggested was given some support by the scant information provided by other period documents, such as entries in the weekly work reports referring to carpenters and masons constructing built-in beds, supported by brick foundations which were referred to as "births."

The people selected to live this close to the Mansion were largely skilled workers who lived at the Mansion House Farm. The breakdown of the eighty-seven slaves known to have been living at the Mansion House Farm in 1799 included twenty-six adult men, twelve adult women, seven women with children, five families, and one couple without children. Large barracks-style bunk rooms would have been a highly economical means of accommodating so many unattached adults. Even though the four rooms set aside for quarters were relatively large, a number of the enslaved workers were housed elsewhere. Accounts of visitors indicate that the slave quarters were loosely grouped across the lane from the Greenhouse. Given the presence of the cabins, it makes sense that many, if not all, of the families living at the Mansion House Farm were housed in those buildings.