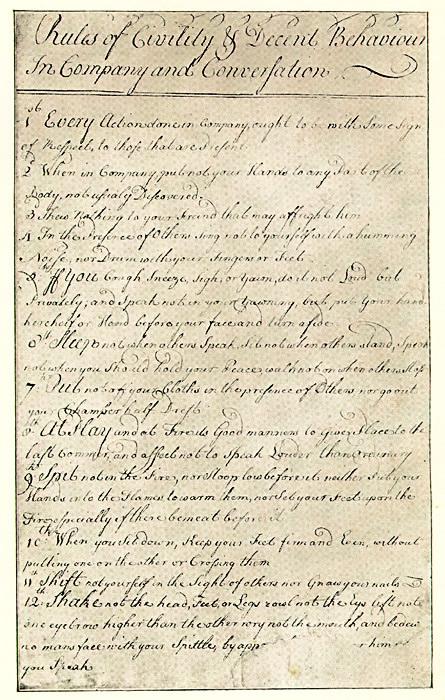 Social education in colonial America went beyond academic learning. It was an expansive developmental process based on communal societal values and birth status, which cultivated ethics, reputation, manners, appearance, and character. For George Washington, who possessed little formal schooling, this form of education became his principle means of personal and professional advancement. From the joint influence of male role models and literature, Washington steadfastly preserved the importance of ideas ranging from honor to humanity to hospitality.

Washington, as a member of the upper tier of colonial Virginia gentry society, had to abide by regimented standards of acceptable behavior. While his older half brothers had received a formal education in England, his father Augustine’s death precluded a similar expensive path. Rising gentlemen were expected to possess an academic background, as well as the polished manners and civility that his brothers’ gained abroad. For the rest of his life Washington lamented his “defective education” comprised of a rudimentary local schooling in math and writing.1

Despite his mother Mary’s attempts to compensate with religion, Washington cultivated self-correction through genteel literature that stressed honor, civility, and hierarchy. The ideas were an amalgamation that centered on maintaining one’s reputation and social standing by conforming to accepted codes of conduct. Washington learned by reading works such as: the gentleman’s magazine the Spectator, the novel the History of Tom Jones, and the etiquette guide Lord Chesterfield’s Letters to His Son. Washington adopted similar wisdom into his own personal guidelines detailed in his Rules of Civility and Decent Behavior in Company and Conversation.

Similarly, Washington sought out masculine examples that embodied the values cherished by society. These mentor relationships proved the greatest catalyst to Washington’s social development. His English-educated, older half brother Lawrence was not only an example to aspire to, but also his marriage into the Fairfax family introduced Washington to the British aristocracy. The noble Virginia-based Fairfaxes, particularly Colonel William Fairfax, exemplified for Washington the pinnacle of gentility and honor culture. Through them Washington solidified his own rank, learned to interact with the social elite, and embraced the practice of stoicism—which championed reserved emotions.

As a result, Washington successfully navigated through the intricacies of eighteenth-century life. His start to adulthood would benefit most from his powerful relationships, which afforded him the luxury of patronage, a system that advanced young gentlemen through the his supporters. Largely through the Fairfaxes and other acquaintances gained through their influence, such as Lt. Governor Robert Dinwiddie, Washington acquired private and public employment as a surveyor and a militia officer. But Washington retained these lessons throughout the entirety of his life from dressing the part of the military commander at the Continental Congress to serving breakfast from his own table to the British gentleman-spy John André to demanding that all American officers have “the Character of a Gentleman, a proper sense of Honor, and some reputation to loose.”2

Isaac, Rhys. The Transformation of Virginia, 1740-1790. Chapel Hill: The Omohundro Institute of Early American History and Culture by the University of North Carolina Press, 1982.

The Rules of Civility & Decent Behavior in Company and Conversation